Now reading: 5 Reasons To Visit Durban’s Beachwood Mangroves (If You Can Wangle A Visit)

A visit to Durban’s Beachwood Mangroves is not as simple as driving up to the gate and taking a saunter along one of two boardwalk trails through the mangroves, as and when it suits you.

Durban has closed ranks and protects this National Monument, one of three last remaining bits of mangrove swamp in and around Durban (the other two are the Isipingo Mangroves and the Bayhead Mangroves), rather fiercely.

You will need to join the regular tours, either on the evening of every first Thursday or the third Saturday morning of every month, by the Honorary Officers of KZN Wildlife – who volunteer their time to take visitors through this green space.

A truly worthwhile experience, the Honorary Officers share a wealth of knowledge about the critters, crabs, birds and trees that collectively make up this wholly unique ecosystem. 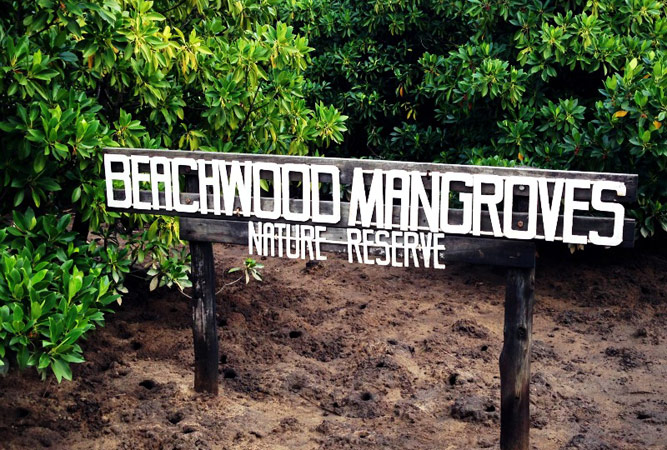 I strike it lucky. I’m going to miss the monthly Saturday tour, but Basil Pather assures me on the morning that I phone, having gleaned his number from the Experience Durban Official Visitors’ Guide, that I could not have chosen a better moment. It is Spring tide’s low tide and the mangrove forest is at its best. But, no pressure, I’ve got an hour to get there.

I almost miss the entrance and have to double back (where would I be without my Waze App). We’re the only visitors in the reserve. Stembile, a student doing her practical at Beachwood before she goes on to work in wildlife conservation, walks us through.

Beachwood Mangrove is a 76 hectare nature reserve at the mouth of the Umgeni River, one of the heaviest polluted rivers in the country. The river estuary is a nursery for baby fish. Unfortunately there is also regular evidence of fishing in the reserve, and several fishermen have been arrested.

Here are 5 reasons to visit this section of beautiful mangroves… 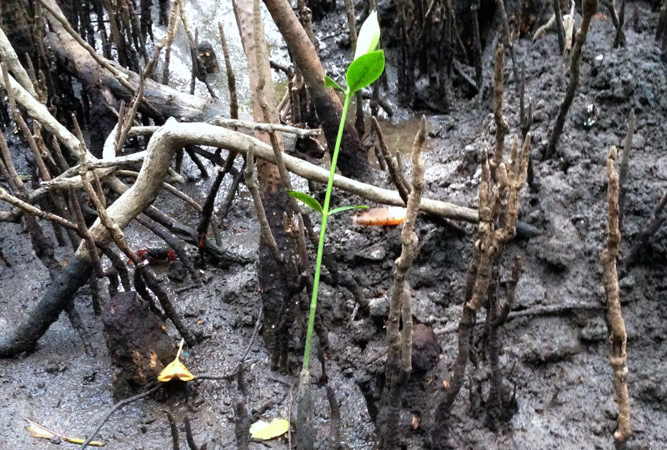 Initially it’s rather difficult to distinguish one tree from another, and not until one takes the boardwalk in-amongst the mangroves does one start to see the differences. White mangroves are recognisable because of their myriad cable roots that grow sticking up out of the mud like little pencils so that the tree can find extra oxygen.

Their incredible root systems mean that they can withstand rough seas and bad weather. They supply shelter and shade for the black mangrove trees.

Where the white mangroves are pioneer trees, the black mangroves move in once the white mangrove has colonised an area. They also have little aerial roots that stick out of the soil but they look more like knuckles. They exit the mud, do a sharp right turn, and then re-enter it again.

Their bark is also slightly darker and rougher than the white mangrove. What makes them interesting is the way they filter the salt in the water. These trees send most of the salt to one leaf in every bunch. It turns yellow and falls from the tree. Their cigar-shaped seed pods are easily recognisable, particularly when they fall, sticking out of the soil.

The Red mangrove root system is unique. They start quite far up the trunk, and then bow out, almost like stilts that form a mass of roots at the tree base. Their barks are also more red than the black or white mangrove. 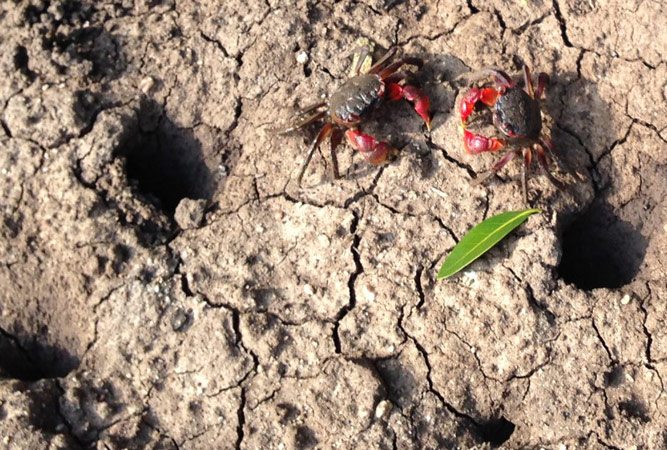 These mangrove molluscs are known as climbing whelks and have a soft body encased in a hard shell with deep ridges that look like spirals. As the tide rises in the mangrove swamp, so they head for the trees to evade the water. Even at low tide we managed to spot a couple still up a tree.

Interestingly, if you remove a whelk from the swamp it will continue to climb up and down a tree at the same time as the tides of its original home.

The Beachwood mangroves are something of a crab kingdom. At last count there were over 904 000 red clawed mangrove crabs in the nature reserve. Also known as the Sesarmid crab they’re rather shy, solitary and very territorial, so you’ll find them in the dense shade of the black mangroves, with whom they have a special relationship – the hairs of the crab vibrate when leaves fall to the ground. This is the easiest way to see this vegetarian easily, for they will come out of hiding to grab any black mangrove leaf that might land close to their burrows.

The tangoman crab, or Cardisoma carnifex, is a very big crab, by comparison, that appeared in the reserve only in late 2008, when there was great excitement to discover that this particular crab was last seen in Sodwana Bay, but had totally disappeared sometime between 1963 and 1972. By January 2011 the Honorary Officers had sighted the first juvenile tangoman. Luckily they enjoy the leaves of both the black and white mangrove trees. However, their favourite food is the red clawed mangrove crab.

Marsh crabs are rather dull, by comparison. These little mud brown crabs are also of the Sesarmid family and live in amongst the burrows of the red clawed crabs without any repercussions. They’re the least shy of the crabs and often climb trees.

Fiddler crabs are by far the most fascinating in the reserve. The male of the species flaunts his one huge pincer, when compared with the diminutive second claw, which he constantly waves in the air either to intimidate other males, or to attract females. Interestingly: fiddler crabs reabsorb their shells instead of shedding them, as they grow.

Mud crabs, or Scylla serrata, are interesting almost solely for their mating practices. They can only mate when the female’s shell is soft after moulting, which lasts only seven to 18 hours. A male literally climbs on top of a female, clasps her with his legs and then carries her around beneath him until she moults (sometimes as long as four days). Then when she moults, he turns her upside down, mates with her, flips her over and then carries her again for a further few days until her shell hardens. 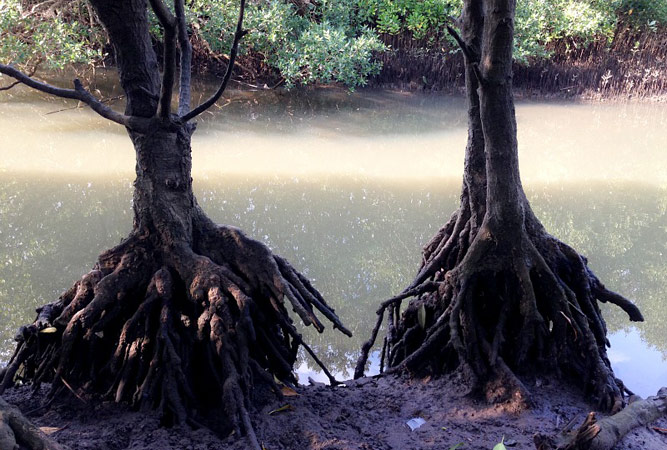 4. THE MANGROVE KINGFISHER (BUT DON’T GO AT LOW TIDE)

This beautiful little bird with its bright orange bill and wing tips of lucid turquoise will only grace the swamp with its presence when the water is in or as the tide enters and leaves. Low tide is not a good time and we didn’t even hear its call.

5. A CHAMELEON THE SIZE OF YOUR THUMB

The dwarf chameleon is exceptional as it gives birth to live young, but it is threatened and has lost most of its habitat along the Umgeni River. The reserve preserves the remnant of this population and they’re difficult to sight. They have only been recorded in the reserve since 2009. 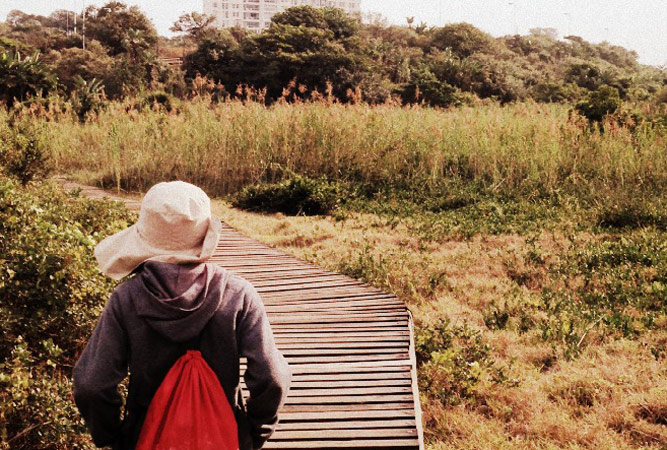