Now reading: The Inanda Heritage Route – A Must Do

To explore a wealth of information on the rich history and culture of Durban’s Inanda, so little of which has been recorded in the annuls of history, take the Inanda Heritage Route.

Just outside Durban is a generous, green valley through which sprawls the township of the same name. Inanda (eNanda), which is isiZulu for ‘a pleasant place’, is also known as the Freedom Valley, and for good reason.

It is where the seeds of the country’s liberation were planted; a valley imbued in history that explores both sung and unsung African heroes.

Inanda is where Gandhi built his Phoenix settlement, it is the spiritual home of the Shembe religion, it is the birthplace of John Dube – the ANC’s first president – and it is where Nelson Mandela cast his vote in the country’s first democratic elections.

The Inanda Heritage Route links Gandhi’s passive resistance movement (satyagraha) with the philosophy that shaped John Dube’s Ohlange Institute, the prophet Isaiah Shembe, and the community of the Inanda Seminary to present an historical perspective on Durban’s role in the country’s history that is at once spellbinding and fascinating… 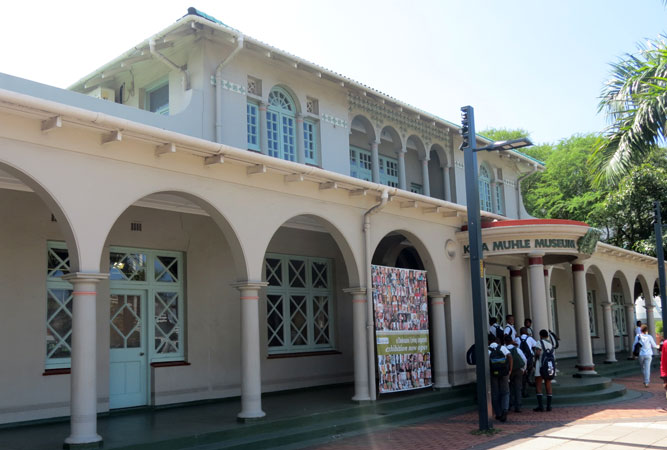 Our half-day tour starts with a drive past the KwaMuhle Museum in Durban, housed in the former Department of Native Affairs. ‘It is important’, our guide, Judith Haynes, explains, ‘to appreciate that the groundwork for the national apartheid programme was happening here in town, whilst just outside Durban, in Inanda, things couldn’t have been more different.’

We arrive at Gandhi’s Phoenix Settlement after only a short drive. I’m appreciative of the fact that we so easily could not have found it on our own.

Bongani Mthembu, who comes to meet us, is tall. He is easily as tall as Nelson Mandela, and almost as imposing. If he stood next to the life-size bronze sculpture of Madiba we encounter later at the Ohlange Institute’s Interpretation Centre, he would probably match its height. As a guide he is softly spoken and confident. And he knows a lot about Mahatma Gandhi. 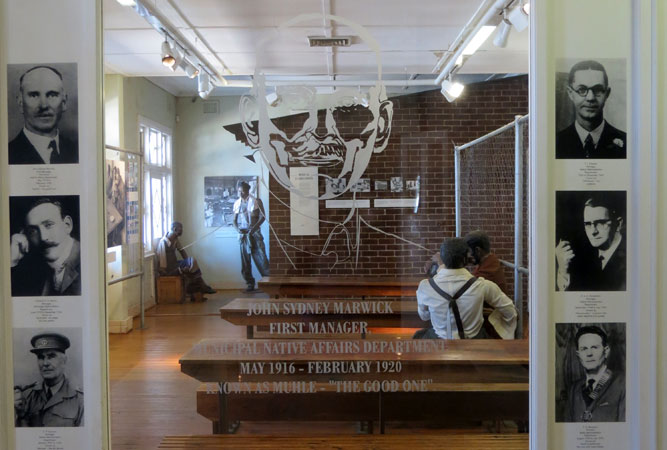 More than that, though, he knows when not to speak. And after only a short exchange leaves us to read and explore the history displayed on wooden panels on the walls of what was once Gandhi’s home, Sarvodaya.

There is no need for much explanation. The panels are filled with Gandhi’s wisdom:

“I will give you a talisman. Whenever you are in doubt, or when the self becomes too much with you, apply the following test. Recall the face of the poorest and the weakest man whom you may have seen, and ask yourself, if the step you contemplate is going to be of any use to him.”

Gandhi’s vision was for a community based on self-reliance. He was inspired by the work of John Ruskin, the Bible, Adolf Just, Henry Salt, Leo Tolstoy and the Bhagavad Gita (quite a combination). It was here that he produced the newspaper, Indian Opinion, and it was here that his wife, Sushila Gandhi, ran the Kasturba Gandhi School.

“Education, for Gandhiji and Kasturba, was in a large part about spiritual and moral training so that one could take on the needs of society and work to improve it.”

After a while, we’re spinning with the wealth of information and the impact of a part of history about which we learned so little growing up under the apartheid regime. 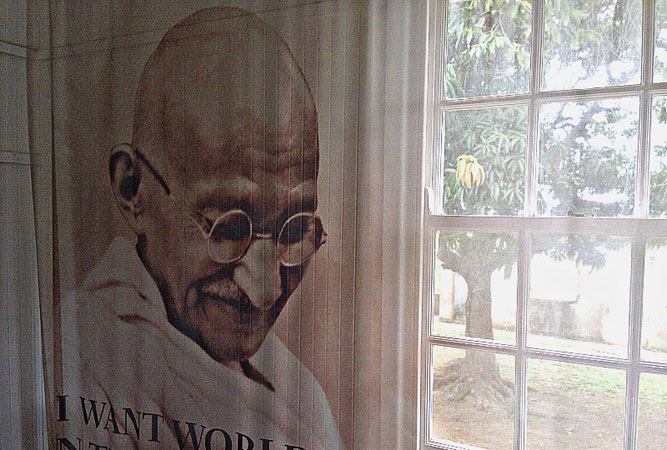 We drive on to John Dube’s Ohlange Institute.

Mandla Nxumalo, the guide at the Ohlange Institute, is a character. He greets us in his designer glasses, Prada t-shirt and red shoes, his dialogue peppered with humour and anecdotes – it was he who greeted Nelson Mandela the day he arrived to vote in 1994 when Mandla served on the IEC.

The museum here is also in a former home, this time John Dube’s. It is equally as fascinating. Little needs to accompany the history panels that paint a picture of the man and his philosophy.

John Dube might be remembered as the founding president of the ANC but he was so much else as well. Hundreds of students graduated from his Zulu Christian Industrial School at Ohlange (which derives from uhlanga and means ‘where all the nations come together’). The school emphasised the value of education and the need for self-reliance. Students learned shoemaking, dressmaking, carpentry, motor mechanics, agriculture and journalism as well as academic subjects.

Inspired by the American Booker T Washington’s Up From Slavery, a book on self-reliance his guiding principle in life was to ‘hasten slowly’. He was to put into practice many of Washington’s teachings.

He launched a newspaper, Ilanga Lase Natal, and as a result became increasingly involved in politics. He was also a farmer, scholar, gentleman, patriot and philanthropist. He valued non-violence and truth, and saw a future for black South Africans that is as inspiring today as it must have been then.

Most importantly he and Gandhi, who lived only a kilometre apart, were friends and neighbours and obviously influenced one another. Both worked towards a collective multi-racial future, both advocated self-sustainability, both men were educated overseas, and both founded revolutionary social movements and political parties.

We visit the Interpretation Centre and John Dube’s grave, where he lies with his two sons and his second wife, Angeline. His school no longer runs according to his principles; it is an ordinary government school now.

Mandla explains that this will change, if plans go through to revamp the institute – he shows me drawings in the Interpretation Centre. They’re slightly weathered, as are the boards and signs outside. The place is obviously in need of funding. Not that this detracts from the value of the history here.

We leave, inspired by the philosophies of two great men and impassioned about the history of Inanda, which lives on despite the violence for which the settlement is notorious.

I catch myself wondering: if these men were still alive… 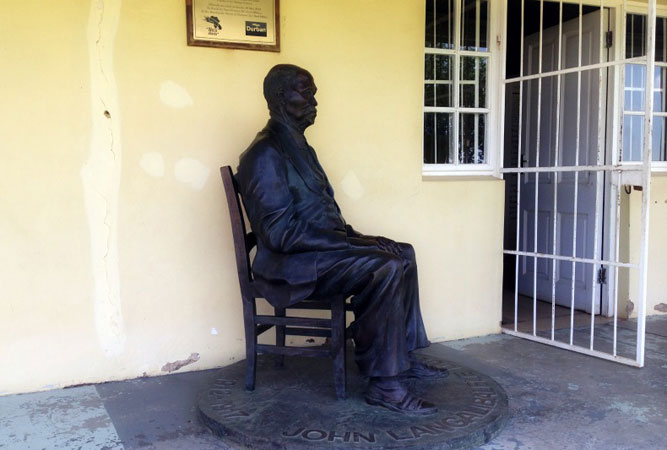 How to do the Inanda Heritage Route, three options:

1) Book through Durban Green Corridor at the Green Hub at the mouth of the uMngeni River. Their version of the Inanda Heritage Route is split into two tours – the Bhambayi Trail and the Ohlange Trail. Ask for details. They also provide any number of other activities in and around Inanda Dam, such as a walking tour of Inanda that includes the Rasta caves.

3) Make your own way: drive to the WowZulu marketplace at the Ohlanga Institute where you will meet Mandla Nxumalo (072 503 3495). The marketplace is alongside the Dube House. Note: We recommend getting there with a guide if you are at all nervous about driving through a settlement area.

The Inanda Route can include: