Now reading: When the sun doesn’t shine in Durban

When we arrived in Durban from the sunny Drakensberg, we expected warm, humid weather.  We checked into Durban Backpackers right on the promenade opposite the beach and relaxed after driving for a few hours.

Out on the beach the wild waves and grey skies indicated that this rain was going to continue for the next while and we wondered what we were going to do in Durban in this miserable weather.  One thing was for sure, we needed to taste a bunny chow and get into the water…

On our first night, none of that happened.  The rain kept pouring and we were in no mood to explore.  So we went in search of food and shelter at a nearby mall. Not just any mall it seems but Gateway offering a ‘Theatre of Shopping’. 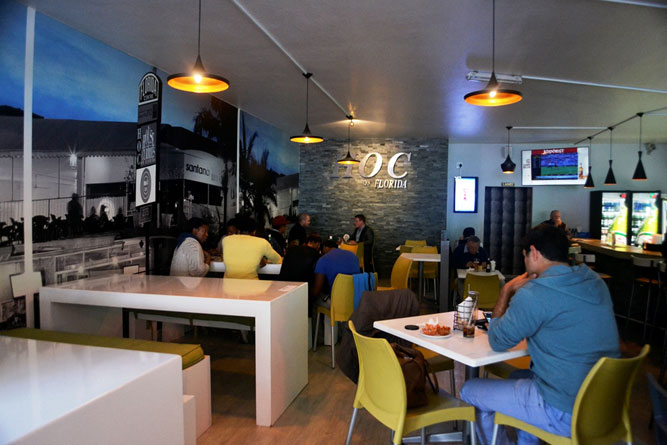 It seems everyone else had the same idea.  Families, couples and friends streamed in through the doorways and out of the rain to keep occupied inside.  I steered clear of temptation and the stores and looked for food instead.  Restaurants and the food courts were teeming with people and palm trees in the mall’s centre added to Durban’s tropical flavour.

With only one full day in Durban, we were up fairly early determined to wish the rain away and get into the ‘warm’ ocean.  We enjoyed a large variety of fruits, muesli and yoghurt with coffee and sat eyeing the cold pool whilst chatting to a tour guide taking a Chinese couple on a tour around South Africa.

Surfing was not going to happen today.  With no one on the beach and even the Miami-esque palm trees looking sad we discovered that SUPPing in the canals was still an option.  We met up with South Africa’s Number One Stand-up Paddle boarding champ, Justin Bing, at Xpressions on the Beach.  KZN Supping Champ, Brandon Read, gave us a quick lesson in SUP technique and off we went to the canals. 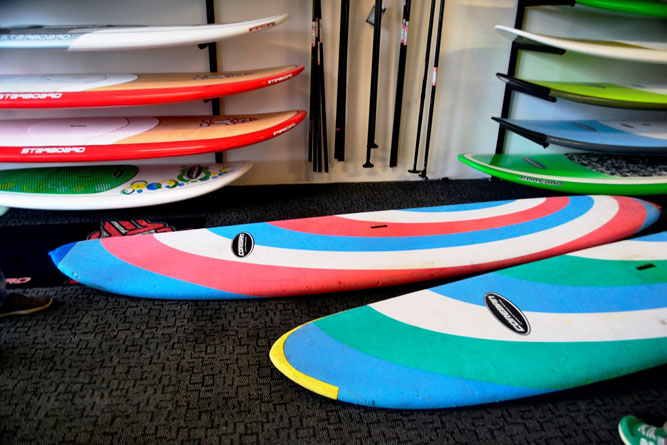 The rain fell lightly as Justin helped us get the giant boards into the canal.  He set off first with Vaughan slowly on the knees before standing.  In no time Vaughan was standing and paddling through the water.  It was time for me to join them. Standing lightly on the board, I hoped my core would remember how to balance on a SUP as it had over a year ago.  Luckily, I remembered and we paddled down the canal towards uShaka Marine World.  We stopped beside a net in the canal which held young hammerhead sharks. I steered clear but Vaughan peered over to try and spot one.

Next up was the search for bunny chow.  Because we were clueless and hungry, we went towards the trendy and populated area of Florida Street.  Keen to eat where locals ate, we walked around and settled for the closest spot- House of Curries.  The bunny chow was good and too huge for me to finish.  Later a Durbanite friend of ours told us that it was like eating a gatbsy at the V&A Waterfront. 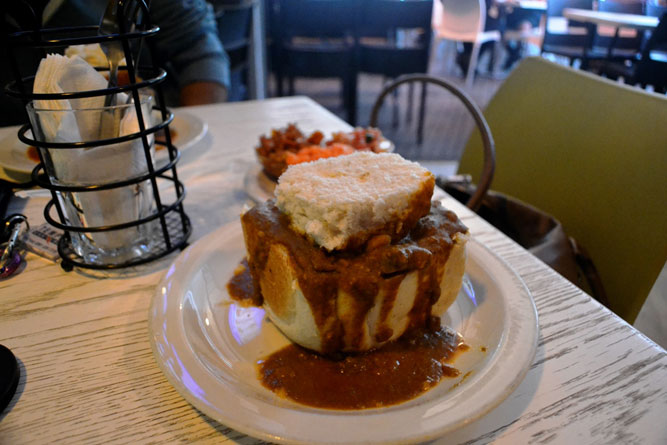 Home at our backpackers, the rain continued to fall and all hopes of walking and swimming at the beach opposite were squashed.  Another day, another season … we will return to Durban and find sunshine. I hope.