Polokwane, the capital of the Limpopo Province (and formerly known as Pietersburg), is the cultural hub of the region half way between Pretoria Accommodation and the Zimbabwean border – a city graced with wide streets, green spaces and a vivid mix of jacaranda and coral trees that are a sight to behold in spring.

Very few travellers to this part of the world can avoid Polokwane, situated as it is right on the Great North Road. Passing through is mandatory, before continuing to destinations like the Kruger National Park and the Magoebaskloof. It’s seldom one is disappointed as it’s an ideal stopover before break-aways to the mountains or further afield. 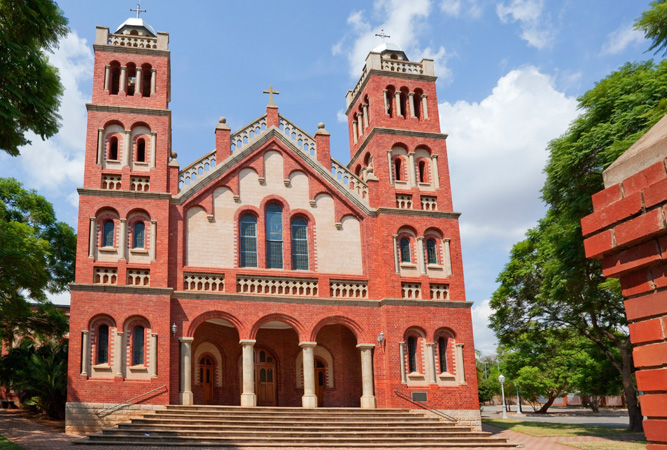 2010 Host City Polokwane: Not only is Polokwane set to host one of the matches of the 2010 World Cup, but there are other exciting attractions that include the Bakone Malapa Northern Sotho Open-Air Museum – a must to experience the way of life of the North Sotho people – and the Polokwane Game Reserve, 5 kilometres south of the city, which has a host of scenic walks and around 21 species of animal.

The city’s museum is home to the Hugh Exton Photographic Museum with a collection of over 22 000 glass negatives that capture the initial five years of the city on celluloid.

There is also an art gallery in the Library Gardens building right in the centre of town that definitely is worth a visit. And the Savannah Centre, with its wide offering of shops and relatively peaceful atmosphere, is a great pit stop to stock up on essentials or for a bite to eat.

Accommodation in Polokwane and near Peter Mokaba Stadium:

Find Accommodation in Limpopo for the 2010 World Cup by using our Limpopo map designed to show distances in kilometres from the Peter Mokaba Stadium to towns within a 50km, 100km, 150km and 200km radius to the Stadium:

Hi, I’m Mmabogoshi Bella Msiza from Limpopo Guest Manor in Polokwane. Polokwane IS BEST KNOWN FOR its warm climate and friendly people. GET YOUR PICTURE TAKEN AT Voortrekker Memorial & Wagon Tracks, because Voortrekker history is in evidence in the f...

I Love Polokwane Because …

Hi, I’m Janine Bornman from Cycad Guest House in Polokwane. Polokwane IS BEST KNOWN FOR being the largest growing city in the Bushveld. GET YOUR PICTURE TAKEN AT Shabby Chic - you'll be surrounded by quirky vintage decor and unique little corners and sur...