You are here / South Africa Travel News / Destinations / Western Cape / Move Over KKNK, the Klein Karoo Klassique is This Weekend!

Now reading: Move Over KKNK, the Klein Karoo Klassique is This Weekend!

I know, it does get a little confusing – all these Kunstefeeses (can one even say that in Afrikaans?) but the Klassique is worth pencilling into your diary, particularly as it’s over this coming long weekend 9 – 12 August.

It might be a smaller festival than Klein Karoo National Arts Festival (KKNK) but it packs a punch all its own, even if it fails to get quite the plethora of advertising its fellow arts’ festival enjoys. But it’s still young – only in its fourth year.

As one can only say in Afrikaans, this year’s Klein Karoo Klassique, as its name suggests, is a ‘fees van klassieke musiek, kuns, streekskos en wyn’ (a feast of classical music, art, local food and wine).

And if the weather continues to hold (and it certainly looks as though the weekend will be freezing), you can look forward to snow on the Swartberg mountains that form a backdrop to the Karoo town. 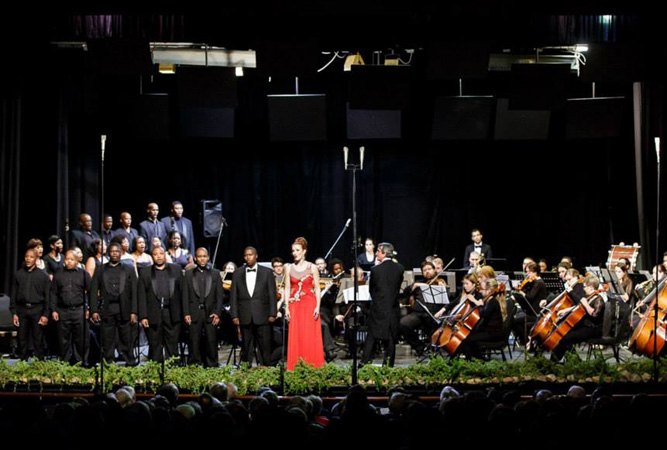 Oudtshoorn lies in a rather idyllic setting between two passes – the Outeniqua and the Swartberg. If you can, drive both of them at this time of year – the scenery, the light and the snow combine to paint a fairly incredible picture.

Oudtshoorn is the largest town in the Little Karoo and during the KKNK and KKK the town comes alive. If you consider that it boasts the most sunny days in any given year of any town in the entire country, it’s probably one of the best spots to head if the Western Cape is wet.

Oudtshoorn’s wide roads and historical buildings are attributable to two ostrich booms, the second of which, just after the Second Anglo-Boer War of 1899, resulted in the building of what is referred to as ‘feather palaces’ – beautiful large period homes that today function mostly as guest houses.

I’m lucky. This is the second year that I get to sing in the Klassique. The choir in which I sing teams up with the KFO (Kaapse Filharmoniese Orkes) also known in English as the CPO (but not on this occasion) and the Festival Choir to add to the line-up. This year we’re singing Vivaldi’s Gloria. Last year was Mozart’s Requiem.

We bundle onto a bus early on the Saturday, head out for Oudtshoorn over the at least two incredible mountain passes en route (when you’re on a bus they’re that much more beautiful somehow) with a brief lunch stop in Montagu.

We reach Oudtshoorn in the late afternoon, rehearse, do a team dinner somewhere, sleep over, rehearse, perform and then head back on the bus – all within 36 hours. One night in Oudtshoorn – both rewarding and exhausting.

The programme’s highlights include:

Photo by and © Hans Van Derveen

When: 9-12 August 2012
Where: Various venues around Oudtshoorn
Book: at Computicket