Aside from Matjiesfontein’s renown as a train station in the heart of the Karoo (and David Kramer’s very famous song), I knew very little about the historical Victorian village before turning off the N1 on a gloriously sunny afternoon, intent on a visit.

On first sight the pretty, wee town (it was founded by a Scotsman after all) is a smattering of old white buildings steeped in history, centred around a railway station through which the Blue Train makes a bi-weekly appearance. In fact we had chosen our timing well, to coincide with the appearance of the Blue Train in little under an hour after our arrival, even if this coincidence was unintentional. 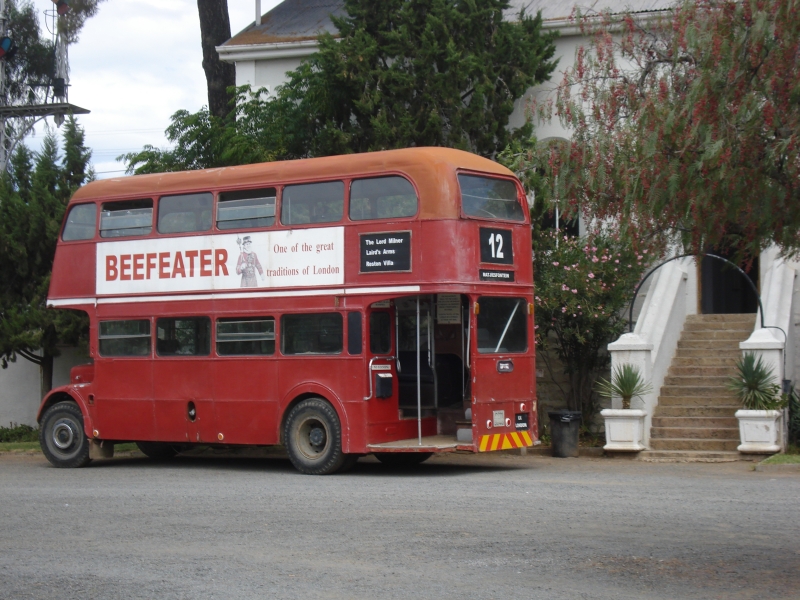 We just had time to check-in to our garden suite (children are not allowed in the main hotel building, so we were not to co-habit with the well publicised hotel ghost on this occasion) before heading up to the station to greet the merry passengers of the Blue Train, who had obviously just dined on lunch accompanied by something a little stronger.

We weren’t the only ones up on the platform. A group of local playing minstrels were already strumming South African ditties upon our arrival and in the next few minutes were joined by another musician from the hotel, and a rather feisty trumpet player, who blasted in the train’s arrival and also took the local bus tour on the rather dejected looking red, London bus parked just outside the station, spewing diesel throughout the station’s entrance. 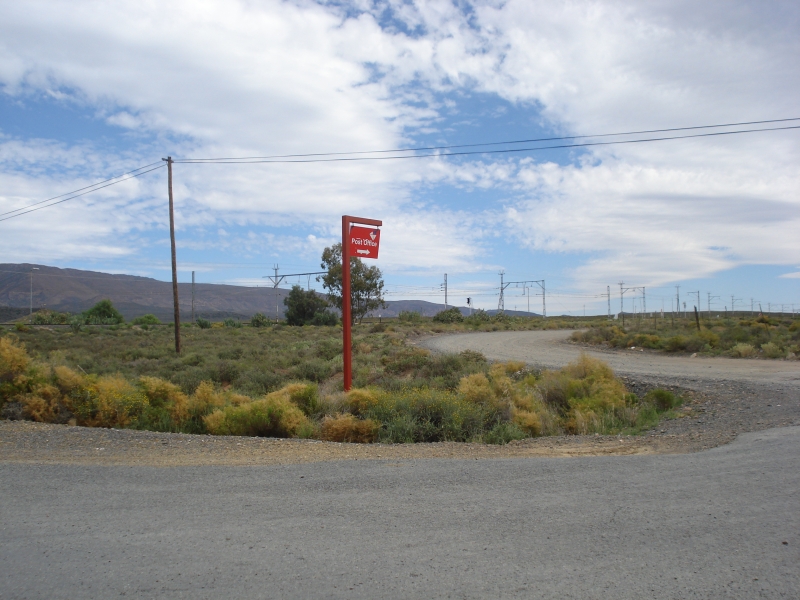 We joined the stream of foreign and local visitors from the train and headed off for what was to be the shortest tour in the country, if not the world. The whole bus tour is something of a spoof, handled incredibly capably by the jovial Johnny, who when he runs out of things to point out on the very short main road of the town of Matjiesfontein, refers instead to just avoided potholes and turnings to the ‘left’, whilst rumbling deep in his chest and exploding intermittently with age-old one-liners that had us all in stiches –  ‘vat hom fluffie!’, ‘it’s now or never, it’s never or now’ and ‘it’s show time folks!’.

Everyone has a good giggle, whilst also getting an overview of the history of the little town. Opened officially in November 1889, Matjiesfontein village received leading politicians and celebrities from Cape Town who came to the double-storeyed Lord Milner Hotel, built by James Logan, who also started a mineral water production plant after building the hotel. Before long, the place was a highly fashionable spa for those who could afford it, and the likes of Cecil John Rhodes, Rudyard Kipling, and Churchill graced its rooms and Olive Schreiner lived here in a little cottage. Today it is one of the landmarks in town – you can’t miss it, there aren’t very many! 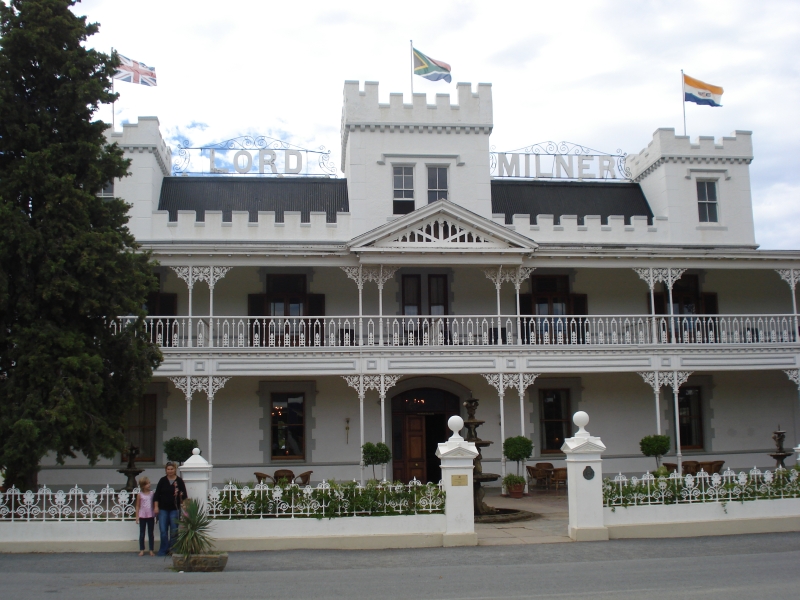 It’s pretty phenomenal actually, that someone managed to turn what was a rather dry spot in the middle of nowhere, into something of a ‘watering hole’. And literally so, as steam trains in those days needed 250 000 litres of water in order to get across the Karoo, and there was no reliable source of water between Touws River and De Aar. It’s a smart man who then pays to have water piped into Matjiesfontein for this reason.

The village remained standing largely due to the skilled Scottish and Irish stone masons who came across the seas to build Logan’s hotel. Logan even imported London street lamp posts, still here today, and the original building that used to bottle water, soda water, lemonade and ginger ale for sale to train passengers, remains in the garden at Tweedside Lodge.

By all accounts, Logan must have been quite something. As well as being a railway man and entrepreneur, he was a dentist, a horse-breeder, boxer and a member of the Magic Circle – an eclectic list of achievements for a man who claimed that it wasn’t that he had done so much, but that others had done so little (wish I could say the same!).

During the Anglo-Boer War (now known as the South African War) the hotel was used as a hospital, after which, things got a little quiet in Matjiesfontein. 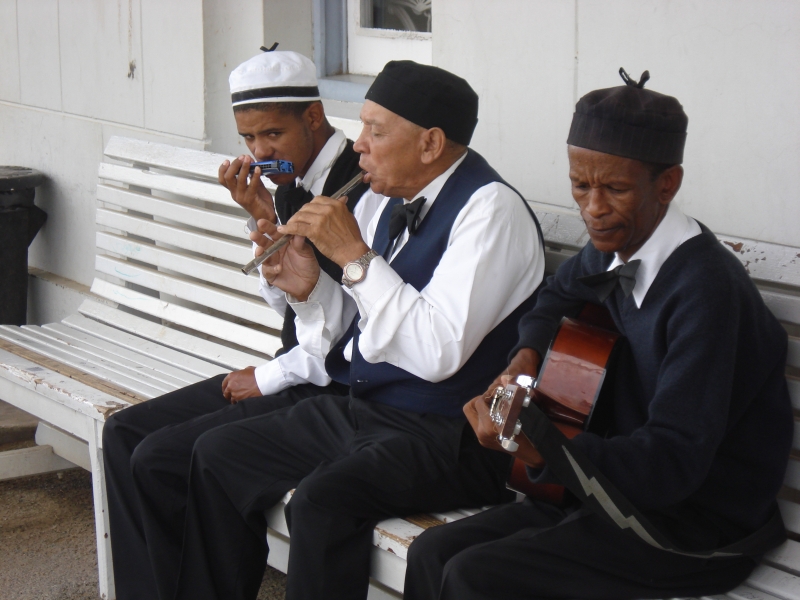 During the late 1960s, the village was rescued from utter decay by David Rawdon, who had already had some success with the Lanzerac Hotel in Stellenbosch. He made a number of extensions and renovations to the place, and the village became a national monument in 1979. Past its heyday it might be, but nonetheless it manages to retain a great deal of its former character and makes a wonderful spot in which to overnight or spend a couple of days.

The grounds are extensive. The hotel backs onto an enormous lawn, where the garden suites lie. Just below the lawn, home to a renegade group of about eleven ducks, there is a quaint little chapel ideal for weddings, from which one descends to a river. One can pick one’s way over here to a vast garden, beyond which is a swimming pool right at the edge of the property overlooked by a large windmill and an enormous blue gum tree.

Luckily for us the intense heat of summer was just over and, although the swimming pool was now icy, we could spend moments at the poolside imagining the days when this was the place to come and breathe in the fresh air of the Karoo, regarded as a cure for lung disease. It isn’t hard to imagine visitors receiving poolside drinks, wanderings through the garden, croquet on the lawn and evening parties that went on until the early hours. You don’t have to be a die-hard romantic for the history to rise up and meet you. 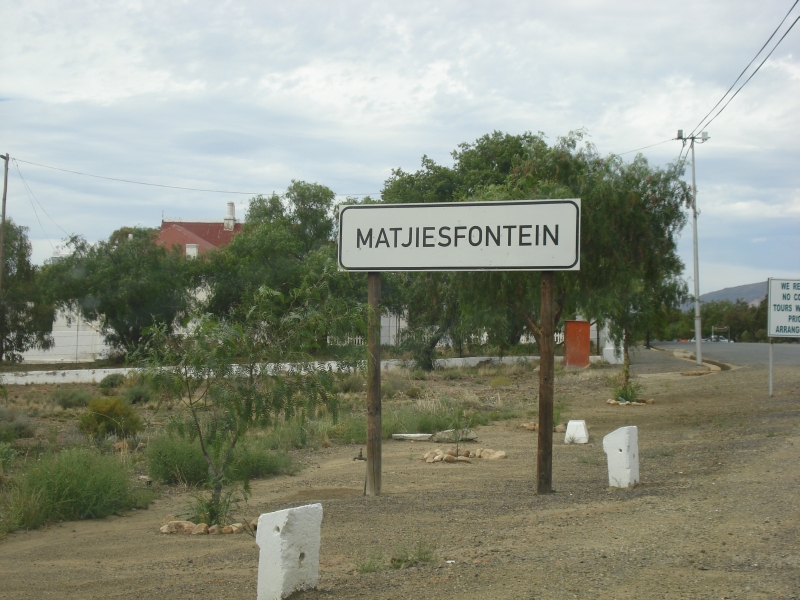 Dinner and breakfast, neither included in the price of the room although you would be hard-pressed to find another restaurant capable of feeding you in the town, is served in the hotel’s diningroom. It’s quite an affair. Waitresses are donned in puff bonnets and pinafores and there is an air of solemnity sadly shared by the food, which tends to be overcooked and suffers from dullness – Cape Town fare this is not. Nonetheless, it is all part of the experience.

You’ve got to have a sense of humour when on the road, right?