Now I’m not sure about you, but soccer fever has certainly hit me in a big way. I have never been a big soccer fan and tend to favour the rugby, however, from the first moments of the 2010 World Cup opening ceremony I knew I was hooked.

South Africa is united and although we haven’t gone through to the next round the vibe everywhere is tangible, electric and absolutely addictive. I had luckily managed to purchase tickets for one game in Cape Town and am extremely disappointed I didn’t get my act together quicker and buy more tickets … 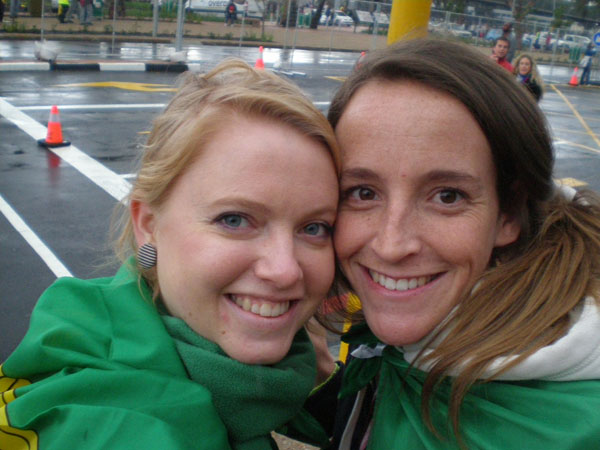 The closer it got to Monday 21 June, the day I had tickets for (Portugal vs. Korea DPR) the more excited I became. I had a number of friends I knew who also had tickets for the game and we decided that it was no fun to go to the Green Point Stadium in normal clothes – we needed to dress up a bit. Our chosen team was Portugal and no not because Ronaldo is playing, although that was an added bonus, but because we could find flags and colourful items to kit ourselves out in.

I woke up early on Monday morning and was literally bouncing around my flat getting ready. Looking outside I thought the weather didn’t look to bad and so dressed in my red top, green scarf and a couple of jerseys (we are in Cape Town winter after all) and the large Portugal flag which I though could double as a blanket of sorts if it got too cold. Oh boy did I misjudge the weather, after picking up friends in Constantia and driving to collect another team mate in Newlands we drove straight into heavy rain. After checking with friends in town it seemed the weather wasn’t any better on that side.

Instead of parking at my friends house and walking to the Newlands train station we decided to park at the station a much drier decision it seemed. It was quick and easy to park right outside and hop into the station to wait under the already jam packed platform (it was only just after 10h00). Since we were all ticket holders we didn’t need to purchase tickets for the train. We waited only a few minutes for the next train to arrive and we were lucky to get on, every inch of the carriage was filled with supporters of every age, shape, size and nationality. With such a jovial atmosphere in the train it was easy to forget about how wet it was outside. 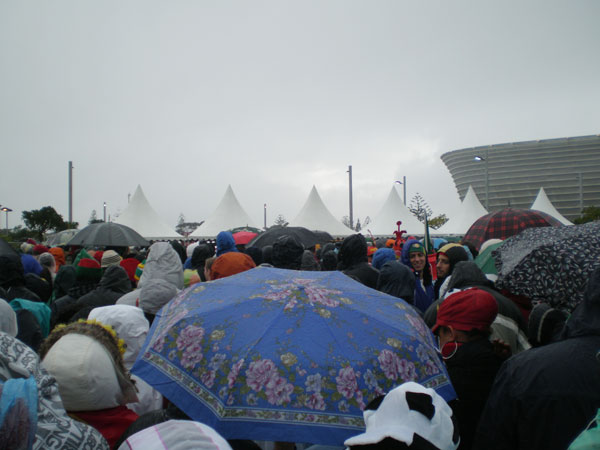 The train ride was soon over and we found ourselves on the Cape Town Station platform with hordes of people blowing their vuvuzela’s, singing and in general happy mood. I haven’t taken a train into town since my high school days and it was great to see the improvements at the station with a new crisp clean reception area. Although I couldn’t really stop to take a look and absorb my surroundings because the crowd of people kept moving along and I was swept up in the group. After meeting up with a few other friends we made our way into Somerset Road where the festivities were really heating up, despite the revolting wet weather.

Even though by this time my shoes were soaking wet and my jeans drenched halfway up my calf I was in high spirits and completely excited that I’d be able to watch a game at the stunning Cape Town Stadium. After walking up and down Somerset Road trying to find a dry spot and something to eat, we eventually settled for a sarmie from Woolworths as the restaurants were just too busy we made our way underneath the bridge and into the packed queues for the first check point.

This queue although steady moving was not under cover and we got even more drenched – using my flag was a failed attempt at rain gear. I am not a fan of large crowds as I always fear there is a chance for mass revolt and suddenly you can find yourself in an angry mob which is not ideal. This crowd was the complete opposite, what a calm bunch of people and it was easy to strike up a conversation with the people surrounding you. 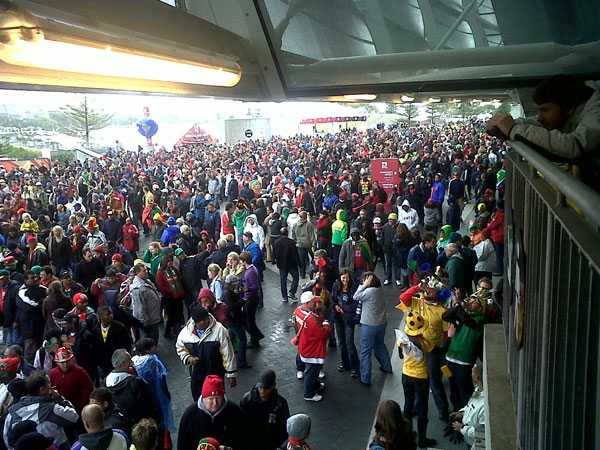 The check point moved swiftly and unfortunately if you had an umbrella you would have lost it at this point as these were not allowed in the stadium. After running up the steps and jumping over puddles we climbed the stairs to the highest level in block 326 to find out seats. The staff was friendly and helpful and after shaking off a few drops of rain we sat down in fantastic seats to catch the national anthems.

The crowd roared with excitement and anticipation and what a game! We were lucky enough to be sitting right behind the goal posts and on the side where Portugal scored 6 of their 7. It was an unbelievable experience being in the stadium and the atmosphere is one that is difficult to describe it was quite magical.

The game was over so quickly and all of a sudden it was over and time to make our way out of the stadium. We decided to stand on the stairs while waiting for the crowds to dissipate and it was wonderfully mesmerising watching tens of thousands of happy soccer fans leave the stadium in a consistent stream and elated fans. By this time the weather had let up a bit and we headed off to Buena Vista Social Club for a celebration, this was a great spot to watch the next game as well as they had a few screens.

We moved on to Cubana on Somerset Road which was packed with foreigners and South Africans alike all enjoying the spirit of the World Cup. I do have to say that I think Cubana is being a bit cheeky with their prices and you must be prepared to pay world cup prices there as they charged R30 for a draught beer (very steep in my and every one in my groups opinion). The venue however was warm and inviting and after a toasted sandwich and chips to fill our tummies it gave us all a chance to reflect on the day’s events and decided that World Cup 2010 is a resounding success.

If you haven’t made your way into town or somewhere that is showing a game yet you need to do so, the vibe is like none you will ever experience. Everyone is enjoying themselves. Everyone is in high spirits no matter what we can say that at the end of the day soccer and South Africa are the true winners!