One thing you need to know about Riebeek Kasteel is that it’s no longer a secret. Which isn’t to say that you won’t enjoy yourself immensely in this gorgeous little town nestled up against the Kasteelberg Mountain roughly an hour’s drive from Cape Town, but if the cost of homes is anything to go by (and there are at least four estate agencies jostling for attention on the square as you enter town) then people are lining up for their spot in the sun in this rural, Tuscan-style village.

Riebeek Kasteel literally is a sight for sore eyes. The scenery is intoxicating, and vineyards, olive groves, mountains and charming cottages create a stylish, yet rustic appeal that has a buzzing local community, and a serious collection of unique eateries that draw foodies from Cape Town in their droves.

It helps, of course, that the Swartland town and its counterpart Riebeek West, a little further along the R311 (the other emerged due to a clash in politics over the building of the valley’s first NG church, hence you’ll find another not even 4 kilometres away) are part of the Swartland Wine Route, and there are a number of award-winning wine and olive estates virtually a stone’s throw from both towns. 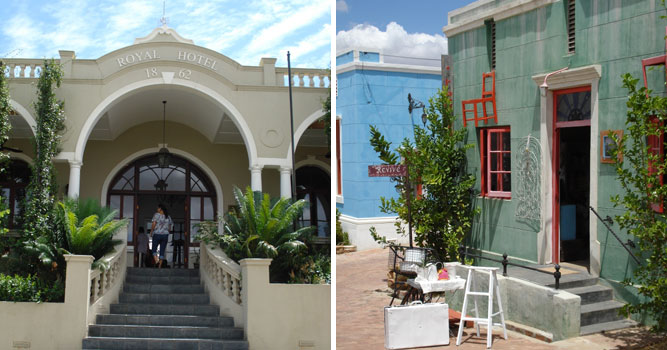 Getting there is a lovely drive with a number of variations, but we headed out along the N1 and then turned onto the R45 to Malmesbury and further onto the R46 to Riebeek Kasteel. But you can take the N7 to Malmesbury and then the R46. En route back, try taking the R302 from Malmesbury, via Klipheuwel, to see the three wind turbines just off the road – makes for interesting viewing. This route is also on the Perdeberg wine district, a collection of some 46 member wine farms that lie in the heart of the Boland, but I am getting ahead of myself.

We were intent on lunch by the time we arrived in Riebeek Kasteel on a Sunday morning, not usually the best day to come exploring we discovered, as a couple of renowned restaurants such as the The Barn were closed, and wine estates were also closed for tasting, but that could have had something to do with the fact that we left any sampling of wines until after four in the afternoon.

We parked off the main roads of the town under a beautiful weeping willow in the hope that after lunch it would still be in shade, and headed up along Main Street to Short Street, just opposite the 19th century Royal Hotel, its verandahs cooled by the lazy sweeping of overhead fans that has the effect of drawing one back in time to colonial times. It’s claim to fame is as one of the oldest hotels in South Africa, and it’s been here since 1862.

Short Street is just that. A rather short street with a dead end in the form of ‘crisp’, where you can pick up fresh, healthy country veg and fruit, except on a Sunday it seems. Interestingly Short Street wasn’t always here. Despite looking incredibly authentic – all of the buildings are built in the traditional style – it’s new, and lined with an exciting collection of shops that include little boutiques with names like Revive and ancient spirit, whilst the Wine Kollective stocks most of the local wines. The street also serves as the venue for the Fine Food and Wine Market, a flea market that happens on the first Saturday of every month.

We were after a restaurant with the rather unique name of Bar Bar Black Sheep, having done our homework about where to eat, and already having found Café Felix closed. And the sign on the Main Road that pointed down Short Street, gave nothing away. My first thought was that alcohol would predominate, but it did nothing to prepare me for the quaint, tongue-in-cheek, we-don’t-take-ourselves-terribly-seriously, except for our food, atmosphere the restaurant has managed to capture.

The décor is an eclectic kitsch meets funky ‘Boeroque’, and bright floral plastic table cloths, hybridised Barbeton daisies in vases, bamboo latte roofs, a wire-art sheep and other paraphernalia, which includes an old ‘third class’ railway sign in the loo from the times before 1994, effortlessly merge to form a fun, friendly and relaxed ambience.

Bar Bar Black Sheep describes its food as slow-cooked country fare with fresh seasonal ingredients. One of the partners in the restaurant runs the Wine Kollecktive next door, so it isn’t surprising to find that the menu stocks all of the wines in the area, including a couple of organic varieties. The menu emphasises that this is slow, country food not fast food and that you can expect to wait, although we didn’t. The service was excellent, the chef, Mynhardt was surprisingly accessible, for a chef (he cleared out plates for goodness sake!), and the food delicious!

We ordered the Cuban Flat Bread, an interesting array of home made flat bread with bowls of beans, guacamole, roasted peppers, marinated mushroom, cream cheese and tomato and coriander salsa, and the restaurant’s famous ‘viskoekies’, made from snoek, pan fried and baked in the oven, served with sweep potato slow cooked with butter, sugar fresh ginger and cinnamon sided with a pineapple and coriander sambal. And we can highly recommend the potato wedges!

This was accompanied by a welcome glass of Babylon’s Peak Chenin Blanc that went down a treat.

We treated ourselves to coffee in the gardens of the Royal Hotel, where the views are quite beautiful and, in antithesis to the buzzing courtyard of Bar Bar Black Sheep, the atmosphere sedate and slow. It makes a welcome space in which to spend a late afternoon gazing quietly out over hillsides covered in vineyards, but it was the local band playing typical South African liedjies like ‘Bobbejaan klim die berg’, and ‘January, February, March…’ that really created the atmosphere on the verandah leading into the hotel in the late afternoon.

A day in Riebeek West was so easily filled with gastronomic and visual delights that it isn’t hard to imagine, with all the olives, wine farms, country markets, shops, galleries, tours and museums, that a weekend here isn’t long enough. Definitely a place to which to return!