We’re standing just outside the Two Oceans Aquarium on a Monday that is also a public holiday. It’s early, and the weather is typically autumnal in it’s insistence on confusing our thermostats with devastatingly blue skies accompanied by winds that could easily have blown in off the tundra. Particularly if you’re wearing slops, like the young girl next to me, whose legs are now a delicate shade of purple.

Our three boys are hopping from foot to foot in their eagerness to be first on, so as to secure the seats at the top in the front, and we’re maintaining a slightly more nonchalant eye out for the bus, just managing to restrain ourselves from making a disheveled dash for the red route as it sweeps in to pick up the little knot of people waiting opposite us (we’re on the blue).

That I love living in Cape Town is undeniable. The Mother City has been named World Design Capital for 2014 (which gives us something else to crow about for the next two years), Table Mountain is an official 7 Wonders of Nature, and we are ranked top destination for 2011 by TripAdvisor Travelers’ Choice Destination Awards. 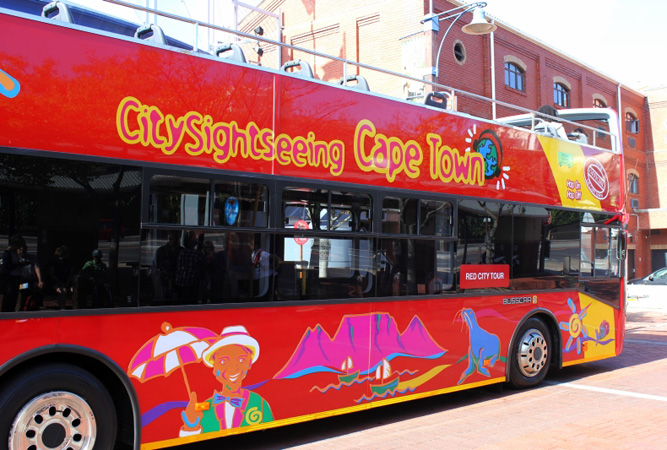 But I’ve done little about exploring the city the way tourists do. And it’s only my son’s insistence, every time he spies the red double-decker, and my nephew’s generous free ticket for himself and two friends (his brother and cousin obviously get first look-in), that sees me join them on the upper deck, hurriedly trying to insert luminous red earphones into the required hole whilst I find the correct adjustment switches for English, rather than the Japanese version, of sights around the city.

Whilst we’re on the subject of Cape Town’s hippness, the hop-on hop-off tour makes it to the top 10 such bus trips in the world, according to a blog I stumble on, right up there with New York City, Rome, Amsterdam and Vancouver – so we’re in good company. And, if you keep your ticket on the trip around Cape Town, blue route or red, you can use it as a discount on one of another 100 such city bus routes around the world.

For tourists just into the city, and after an introduction to the city’s sights, the Hop-on Hop-off tour offers 31 stops between the blue and red routes, allowing you to do the city at your own pace.

The Blue Tour, our choice this morning, is a mini peninsula tour that qualifies as a scenic route. It circles the back of Table Mountain and includes 13 great stops at the Two Oceans Aquarium, the Nellie (Mount Nelson Hotel, where you can do afternoon tea on the terrace) Kirstenbosch, Constantia wine route (including tours of Groot Constantia and Eagles’ Nest), the World of Birds, a township tour of Imizamo Yethu, Mariner’s Wharf, Camps Bay and Sea Point.

The Red Tour includes St George’s Cathedral, a number of museums, the Two Oceans, the Nellie, District Six Museum, the Castle, Table Mountain Cableway, Camps Bay and Sea Point. This tour is a great way to see the city bowl and hop on and hop off at all the exciting bits.

There are also night tours that take one up Signal Hill, around the Atlantic coastline, through Camps Bay and up to the upper Table Mountain Cableway station, weather dependent; wine tours and a canal cruise. And you can buy one or two-day tickets (best booked online as you get a discount).

As we head off through the city, with Table Mountain on our right, we pass Cape Town Tourism’s office, head up Long Street, already buzzing despite being only 10am and a public holiday, and then up and around past the Nellie (a must for all visitors).

The 16 channel, multi-language commentary keeps everyone on the bus up to speed with the sights, one of them dedicated to kids that gives a running commentary by animals. I learned that Cecil John Rhodes was not only an extremely wealthy confirmed bachelor, but during his later years was stalked by a Polish princess Catherine Radziwill, who even falsely claimed she was engaged to Rhodes.

The commentary also gave me a much better insight into the existence of Hout Bay and why it is named after wood. Wood was a huge commodity back in the days when Cape Town was first emerging and was cut in copious quantities to help build the city.  The forests of the peninsula thus lasted but a generation, and mostly exotic species replaced them (hence all the pines).

At each of the stops along the way people hop off and on. The wine route, which had been added to our journey, was particularly popular and doesn’t take long to do, giving visitors in and out of the city a means for a soupçon of the many highlights, using public transport.

We remained on the bus until we reached Hout Bay and the World of Birds, where we hopped off to experience the sanctuary that has been here for the last 32 years, providing a home for well over 30 000 birds and animals.

The myriad birds are kept in walk-through aviaries. It’s like a cage within a cage – instead of looking in on birds kept behind glass or wire mesh, you’re right in with them (bar the parrots who are liable to give you a nip). It’s quite an experience, and worth at least one visit. If you live in Hout Bay or close by, you can sign up for membership that gives you free entry for a year.

The squirrel monkey jungle, a walkthrough enclosure through which visitors are allowed to stroll with their backpacks securely zipped and earrrings safely stowed away, was a highlight. They’re a mischievous lot and extremely quick. Their soft padded paws were a surprise, as was their complete lack of fear of humans – you are simply climbing gyms. They are not fed by visitors, nor are they stroked, so their wildness is maintained.

The owl sanctuary too is incredible. I love owls and wondering into a ‘cage’ to find an owl on a perch right above your head, totally unafraid of you, but far from tame, left me speechless. We had lunch with the flamingoes at a series of tables provided for picnics.

Busses on the blue route arrive and leave every 25 minutes, and they’re on time, so you can plan your day around their arrivals and departures. But by 2.30pm we had three pooped little boys ready for a drive back to Cape Town. Seeing Hout Bay from high allowed me to peep over walls I’ve not even noticed when in the car.

Free Things To Do In Cape Town this Summer

Cape Town might be the most expensive place in South Africa, but the city’s long summer days (sunrise before 6am and sunset well after 8pm) help diminish the sting of inflated prices. Best of all, summer comes with a list of things to do without price tags ...

A Guide To Entertaining Any Visitor To Cape Town

Ever noticed how popular Cape Town is? You just have to look at how many Gautengers have moved here, or the many Europeans, for that matter, to realise that Cape Town really is the happening capital of South Africa. But because it is popular, it's also a pl...