It’s a pretty valid question when asked by a four-year old en route to the Two Oceans Aquarium in Cape Town, but it had me stumbling for a moment as, with my indicator stuck, my head craned round to see oncoming traffic, and my other finger reaching for the air conditioning that needed a mighty overhaul if you consider the angst with which it was emitting tepid air, my brain and mouth couldn’t get in synch to wrap around the rather meaty ‘Indian and Atlantic, love’. 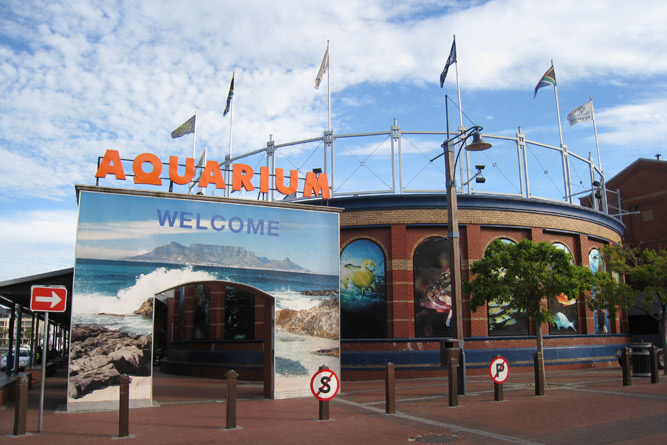 Just as well it isn’t the Pacific Ocean that meets the Indian or the Atlantic, or my child would have spent at least ten minutes talking about specifics. The Two Oceans Aquarium based at the V&A Waterfront is probably the only major tourist attraction to which Capetonians actually go. Well okay, that and Table Mountain, Boulders beach and a couple of others.

But what I’m actually trying to say in a roundabout way, is that it is a great place for locals with children, particularly given the current ‘Take 4!’ special, which allows two adults and two children to get in for R180.

The Two Oceans is beautifully laid out. There is an almost ‘other worldly’ atmosphere about it and one is immediately lost in amongst the aquarium exhibits. Every time I manage ten minutes infront of the kelp forest I make an undying promise to return on my own for contemplation to get the creative juices going. I have yet to do so, but I will! 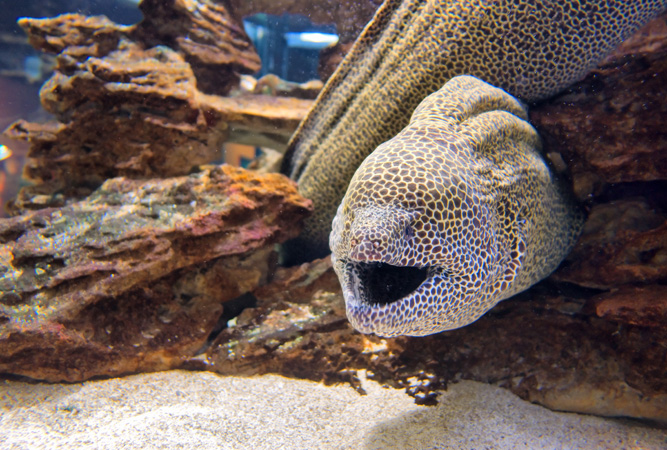 Kelp forests, such as this one, are only displayed in two aquariums in the world – the other is Monterey Bay in America. This one in particular houses three types of giant kelp. I must say, if I were a fish, this is where I’d like to be…

On our last visit, my son had his back to the exhibit when the aquarium’s CEO (or at least I think it was he) took that moment to make a dive in his scuba gear and reared up right behind my son, who jumped about ten feet in the air much to the hilarity of all at the exhibit at the time. And you don’t have to be the CEO to dive in the kelp forest.

You’ll need an advanced scuba qualification, but with it you can feed the hundreds of fishes contained in the 800 000 litre exhibit, or dive with the sharks in the I&J Predator Exhibit (for this you’ll need an open water one or discover scuba qualificaton). See Diving at the Two Oceans Aquarium. 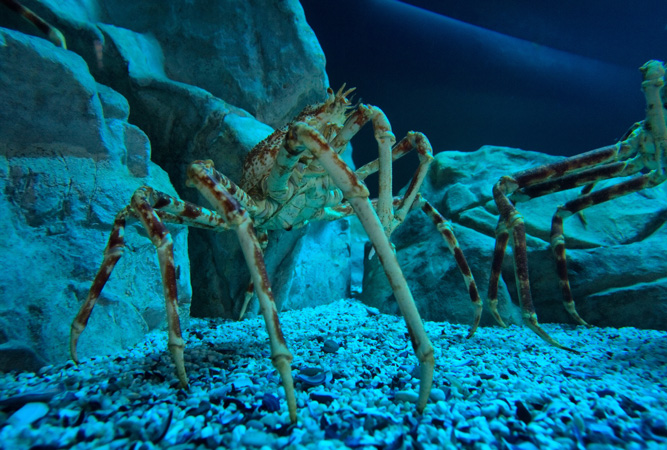 The Kelp Forest is by no means the only highlight at the aquarium. Exhibits are divided into an Indian Ocean and Atlantic Ocean gallery, each of which has an array of displays full of vibrant fish, crabs, eels and whatnots.

The Atlantic Ocean gallery is great for the older kids as its full of jelly fish, octopus, Knysna seahorses and giant spider crabs, whilst the Indian Ocean is full of darting, colourful fish typical of more tropical regions. So you’ll see butterfly fish, damsels (not those in distress), surgeonfish and angelfish.

A quick tip: should you need a diversion, find Nemo and Dory in amongst the Indian Ocean gallery. 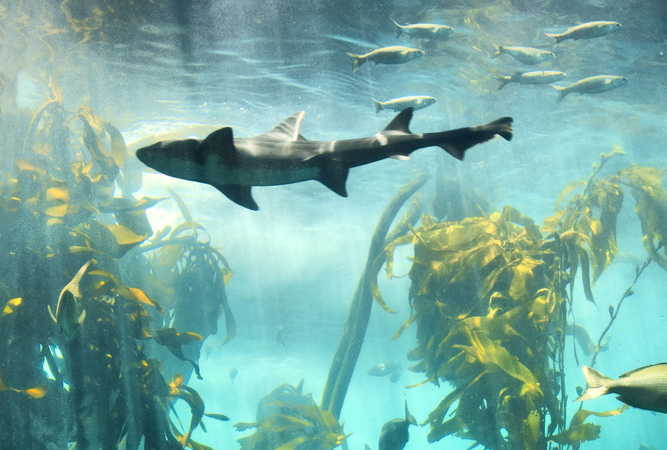 Frogs beyond the pond should work its magic too. It’s a fairly new exhibit brought about by the International Year of the Frog (2008). There’s a large touch screen to magnify the different frogs, many of whom are under threat, there’s a frog puppet show, which outlines the journey of the Western lepard toad from a suburban garden to a wetland – it’s a win of an exihibit for both big and small, especially when surrounded by giant arum lillies, mushrooms and clivias.

And just when things start to get tough – you’ll have made your way through a whole floor of exhibits – you’ll head down the ramp towards the Afrisam Children’s Centre and get a few minutes respite, whilst you watch the seals continue their antics under the water. There is always a series of arts and crafts on the tables for children. It is a great space for them (and their parents) to relax and daily puppet shows  introduce them to the world of Peter the penguin, Nemo and a rather menacing shark. 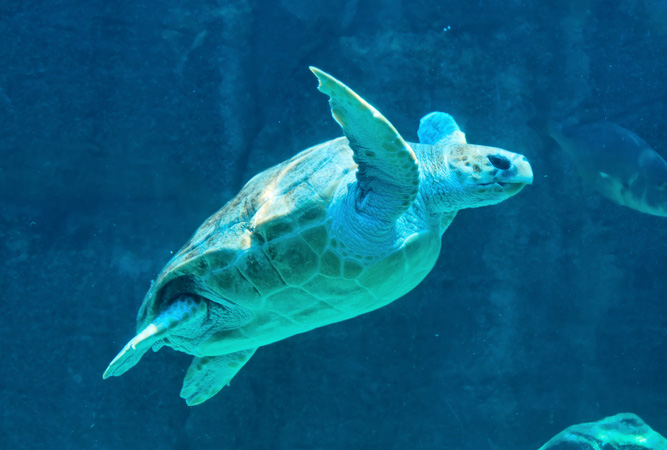 Upstairs is the Sappi river meander you’ll find a colony of African penguins and rockhopper penguins, African black oystercatchers and a series of river fish, although you might have to breathe in slightly shallow breaths as it can get a little smelly and a tad warm up here.

Somewhere in between, or after, make time for the I&J predator exhibit where rays, loggerhead turtles and ragged-tooth sharks swim peacefully side-by-side and then when you can no longer remain on your feet, head down to the Shoreline Café, which, thank goodness, stays open until about 6pm and does a few mean ‘family-oriented’ meals.

It’s a good place to meet friends in the afternoon, followed by a meal if you intend missing the traffic out of town again. There is also a dedicated children’s play area that gives you a well deserved cappuccino break! (The restaurant has just been renovated and transformed into a deli/self-service facility, due to open again in the second week of November). 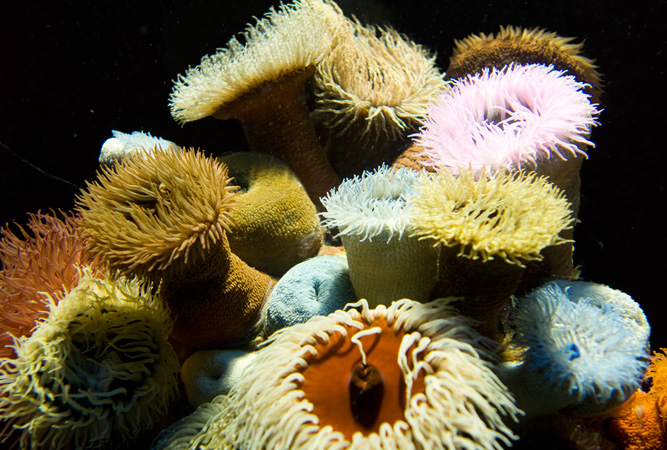 There is always something new going on, and various other fun things – such as sleep overs, evening lectures, competitions and gala evenings. And children can have their birthday parties here too. So when you’re next at your wits end for an outing – head off to the Two Ocean Aquarium.