Putting a bouncy castle in your back garden is an almost full proof guarantee of clientèle. Or at least, those of a certain age group. If you’re in the presence of a four-year old, there is virtually no stronger magnet.

‘Mom, it’s a jumpy castle!’ emitted together with a gasp of excitement and much hand tugging, and before long, we’re sitting in the sun dappled – disturbed intermittently by rain – garden amidst much tree climbing and blown up castle jumping – the things that please small people!

But it wasn’t all that bad. I mean, for us adults. On the contrary, Vanilla Cafe was something of a find, considering it was right next door to our accommodation and one of the few child-friendly restaurants in Greyton. 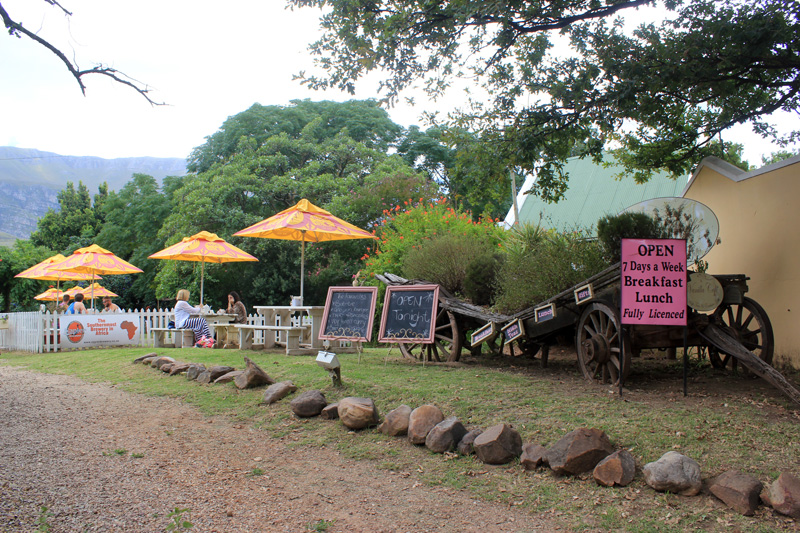 The Vanilla Cafe sits opposite the Oak and Vigne Café, an espresso and sandwich bar that serves light lunches, runs a deli and wine cellar and also houses Von Geusau’s chocolates. One assumes that the two manage to co-exist harmoniously for it must feel, when times are tough, that one or the other is seriously encroaching on the other’s turf.

Yet as I watch, patrons seem to wander between the two, and when the sun is out (and it hasn’t been much of the weekend) then the pretty little garden of the Vanilla Café is the place where locals and visitors mingle.

The café tag is a bit of a euphemism, as the menu is rather elaborate for a country outlet that’s big on breakfast. For one, the breakfast line-up includes the Cape Town Kugel – a combination of smoked salmon, avocado, poached eggs and hollandaise sauce all served up on an English muffin, and the lunch menu even boasts a vegetarian burger! 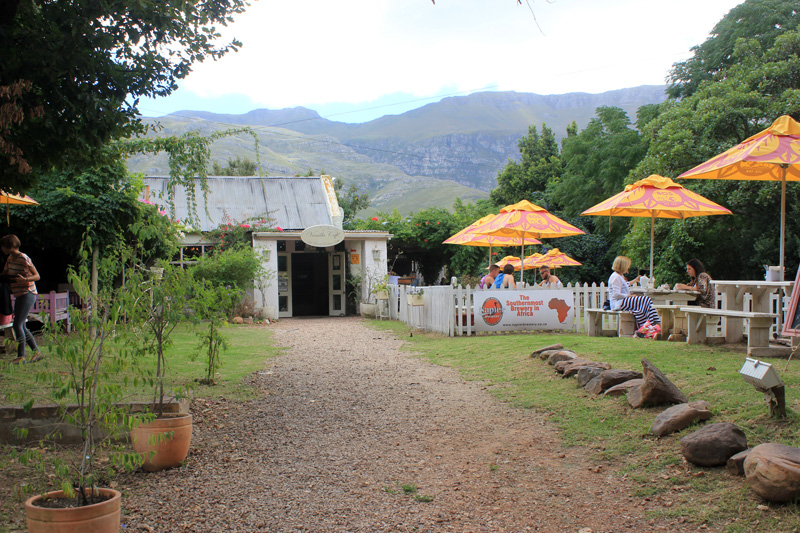 Locals are exuding at the little picket fence that divides the garden and the rest of the restaurant about the World Cup, which they reckon, alongside most of South Africa, is just the best thing that could have happened to us. They’re all sipping on mugs of coffee in various guises – Vanilla Café does a fair number of filter, espresso, cappuccino and latte s.

At the table next to us is a local biker still in his togs, his two huge boerboels that surprisingly are but delicious giants by comparison with his little miniature terrier, who must have confused its height and weight with that of its siblings, because it more than lives up to its name by terrorising my son whenever he moves (admittedly my son does not do anything in small measure and tends to jump everywhere), which is rather alarming to us all.

Dog safely tied up, whilst boerboels feed on scrambled egg, we resume our search of the menu, not sure, given that it’s now 11.30 in the morning, whether to do breakfast or lunch? No problem, one of us will tempt fate and get breakfast, whilst the other will definitely have to try the Falafel burger. And whilst we wait, we order enough hot drinks to ensure our numb fingers have something to wrap around in order to defrost. 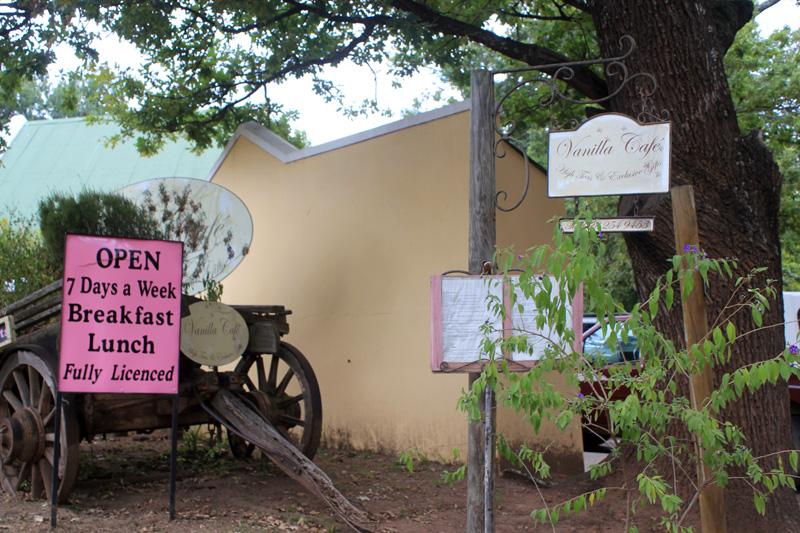 Now we begin to look around. Vanilla Café is exceptionally pretty. Outside the tables and chairs don’t need much more work, given the views, and with the sun now out, the swings and jungle gym are being put to use. The café is housed in what was originally an old barn, believed to have been used by the resident blacksmith in the days of horse and wagon in the village. Part of the wall near us remains distressed, and we guess that this is why. That or it’s purely decorative. But we like to feel this link with the past.

We revert to the menu again where Ravioli competes with a Greyt-Onion Burger and Thai fishcakes. Nummm. Breakfast too is none too shabby, and I only opted for the French Toast, which arrives dripping in honey and a huge dollop of cream cheese, over the Muesli Cup – layers of nuts, honey, Greek yoghurt and muesli with seasonal fruit – because it’s chilly.

And whilst I initially think two slices of toast a little on the stingy side, it must be said that it was more than pleasing to digest. Our only disappointment was the Falafel burger, which appeared to be little more than a fistful of chickpeas given rather a pounding and dolloped on a burger. It could have had a little more substance, even if the sauce and chips were good. 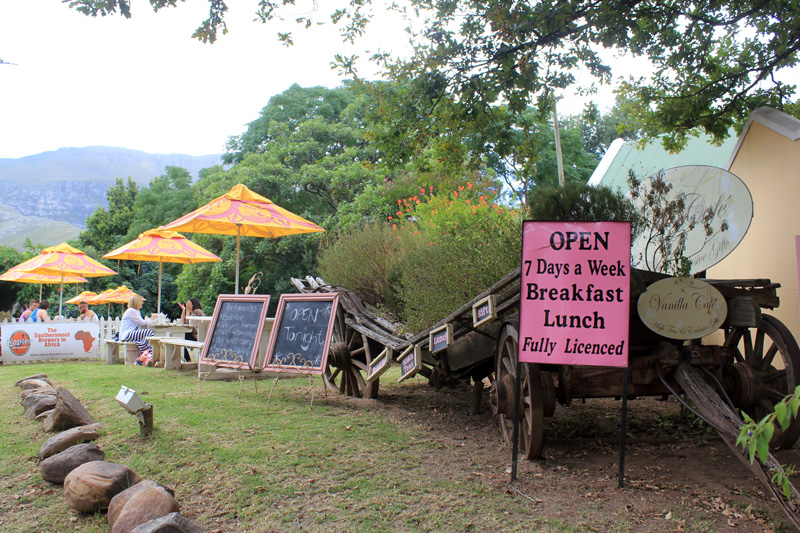 That said, you don’t mind if the food is not quite there, when your usually fraught mealtime is pleasant because junior has other things to occupy him. And between the jungle gyms, dogs, other children (with whom he is fascinated) and the odd taste of chips and tomato sauce, he is in four-year old heaven.

It begins to drizzle. Now it’s pouring. Waitresses rush to lift the fine cushions and seating arranged on the other side of the fence, where a portion is devoted to a kind-of lounging effect, and we adjust ourselves to fit under the umbrella. Despite our patron’s urging us in, we’re determined to sit it out and await the sunshine we have been denied the last couple of days. And just as well, as it resumes within a few minutes.

I do go to scout out the indoor part of Vanilla Café. The present owners have been there but three months, and this is the first weekend that they’re feeling the effects of the weather; usually they’re packed. 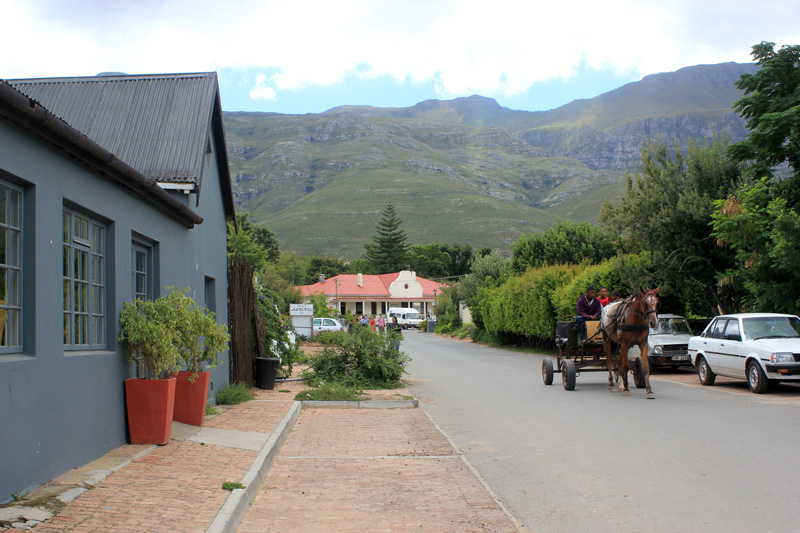 Inside there is a crackling fireplace and black boards announcing the various menu options vie with an assortment of gifts and nick nacks, local art and décor items. Let it not be said that you are short of choice when in Greyton. There is plenty on which you can spend your hard-earned Rand, and the items add in many ways to the restaurant, which has an eclectic atmosphere as a result.