You hear this: Langebaan Fossil Park. You think this: Complete boredom, what a waste of a day. Or at least I did when my friend asked me to come with her to the Fossil Park in Langebaan. Fossils just don’t do it for me. I like history, I like culture but a rock is a rock, right?

About an hour’s drive from Cape Town, Langebaan is well known for its white beaches and its holiday vibe. What many people don’t realise is that Langebaan has a rich ecological history and is more than a mere holiday destination. For all of those people, who like me, thought that fossils would be boring, you will be in for a treat, so be sure to visit this fascinating park.

Langebaan today boasts an environment rich in flora and fauna, a shrubland vegetation that is part of the Fynbos Kingdom and unique to the Western Cape. 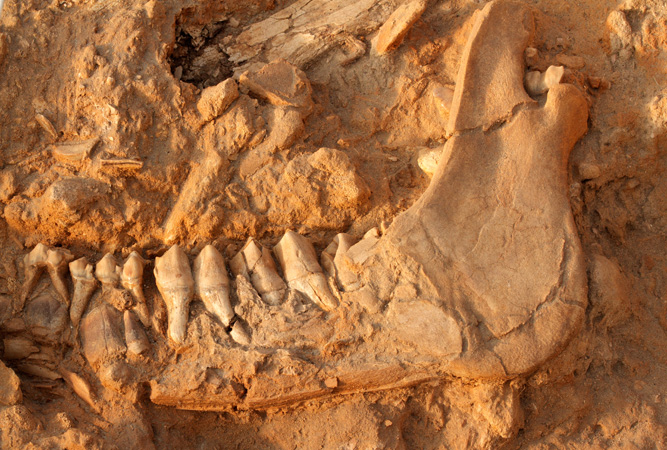 That said, the scenery is drastically different to what it was five million years ago. Standing on a dried out riverbed it is hard to imagine that all those years ago this area was lush and green with palm trees swaying in the breeze, home to giraffes, elephants and an assortment of birds. There is an interesting history here because, before it was a fossil park, it was a mine and the first two fossils were discovered in 1958 by Isaac Brown, during a phosphate mining operation.

One was an elephant tooth and the other was a short-necked giraffe’s (a Sivethere) anklebone. After these were discovered, paleontologists starting excavating and many more fossils were found, making The West Coast Fossil Park what it is today.

We followed our guide Stefan to one of the excavation sites. Femurs and jawbones are clustered together, as well as an assortment of other bones I don’t recognise. The sheer volume of so many skeletons is breathtaking.

What is interesting is the fact that both land and sea creatures have been found here. On top of giraffes and elephants, flipper bones, hippo teeth and a whale vertebra have also been found. It is though that a great flood occurred all those millions of years ago and the river collected the bones and brought them downstream where they were clustered together until discovered.

Over the past 40 years, the bones of 200 different kinds of animals have been found, some of which were new to science. Stefan points out the bones of the extinct Wild African Bear, which weighed in at 750 kg as well as a Gomfothia, an elephant with four tusks.

After the excavation site we stepped out into the cool breeze and look at the large sorting trays, where children are allowed to dig through in the hopes of finding more bones. We then go to the Laboratory and Display Room. 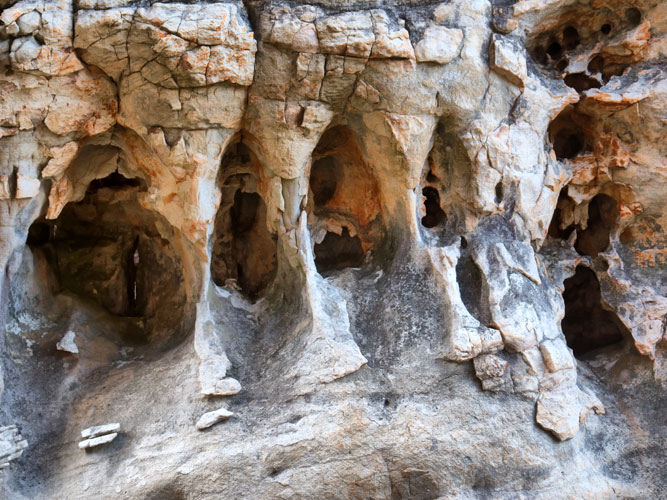 In the Laboratory a paleontologist is sifting through a couple hundred tiny frog femurs. The Display Room has a fascinating array of extinct animals, with the most exciting being the skull and jaw of the extinct Sabre-Toothed Cat.

After the tour had ended we make our way to the coffee shop, named The Sivatherium, Be sure to try the lemon meringue, it’s homemade and deliciously zesty.

Set up like an old dining room, there are only two waitresses who serve tables as well make the food. Although this means everything takes a bit longer, the menu is delightful, ranging from homemade pies, to scones and cakes, as well as delicious coffee and homemade gingerbeer.

If fossils aren’t enough to keep you satisfied, there are also several mountain bike trails with varying degrees of difficulty and distance. On top of this, there are also horse trails and walking trails. Bird watching has proven popular as well and as you arrive at reception you will be swept away by the many weaver nests dangling in the trees.

Tours run on the hour, every hour.
It doesn’t matter if you are the only person there, you will still be treated to 45 minutes of fascinating fossil history.
Open from Monday to Friday, 8am -4pm.
Saturday and Sunday from 9am-midday.