These Northern Cape tented camps give travellers a first-hand experience of the vast space and silence that best characterises South Africa’s biggest, and least-populated, province.

The Northern Cape is home to some of the country’s most beautiful attractions – the Kgalagadi Transfrontier Park, Augrabies Falls, and Namaqualand, to name the more obvious ones.

Best known for its red sand dunes, desert landscape and spring time flowers the Northern Cape’s scenery is indescribably beautiful, but often harsh. And in summer, in the heat of the year, its northerly reaches can seem both barren and intimidating.

Distances between little towns are huge. Most of it lies in the great Karoo Basin littered with Dolerite intrusions and scatterings of sedimentary rock – more of a moonscape than land for habitation.

And then comes the spring, when Northern Cape tented camps are one of the best ways of exploring this part of the world.

Then the high-lying south and south-east of the province – better known as the Nuweveld and Roggeveld – burst into flower, dependent on seasonal rains. This is echoed on the west coast in the now famous Namaqualand, where granite hills and seaside towns provide a bird’s eye view of carpets of flowers.

Draining the interior of the province is the Gariep or Orange River, the only source of water other than the meagre 400 mm of annual rain in the more arid parts of the Northern Cape.

It’s a province that once experienced, demands a re-visit. 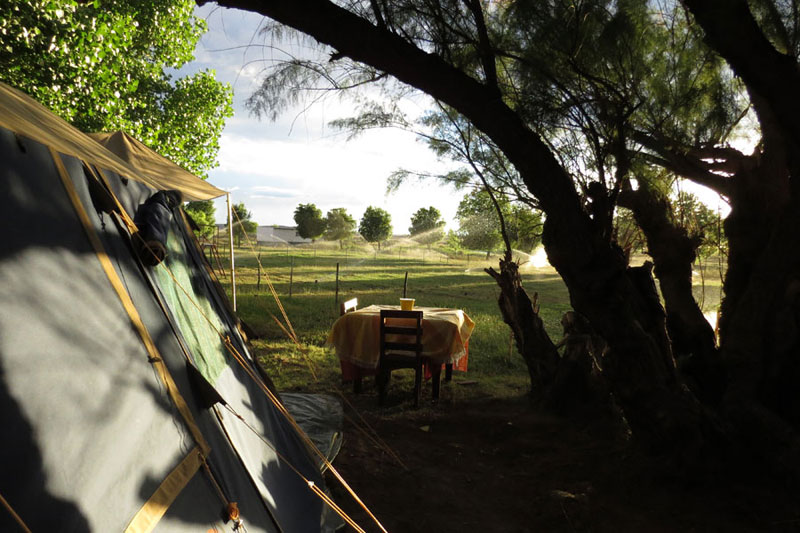 Stay in tents on the sunset side of this guest farm in the Karoo Gariep Conservancy, where you have also see the only hippos in the Northern Cape.

Set in the shade of old Tamarisk trees, overlooking the plains of the Karoo, your tent is equipped with one double and two single beds in 2 sections. Bathrooms are communal.

Highlight: braais, pool, a farm restaurant serving organic lamb, trips to see the hippos in the Karoo Gariep Nature Reserve, as well as over 200 species of birds. Explore Nieu Bethesda and Graaff-Reinet as day trips. 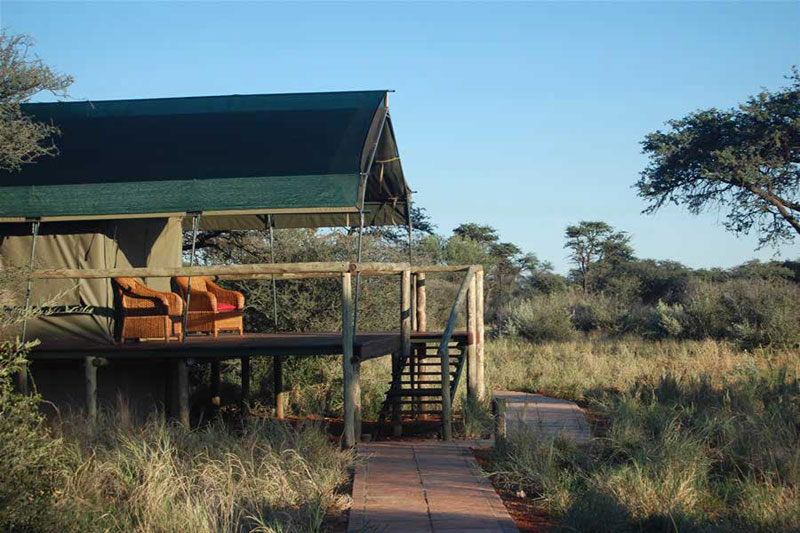 The five luxurious tents offer accommodation for family, friends or small groups. Decorated in an African design, the tents have a full en-suite bathroom, air conditioning and underfloor heating.

Accommodation is offered on a Dinner, Bed and Breakfast basis and includes an afternoon and morning game drive.

Highlight: Mattanu Private Game Reserve is the only reserve in the country where on can view breeding programs of roan, sable, buffalo, tsessebe and Livingtone Eland. 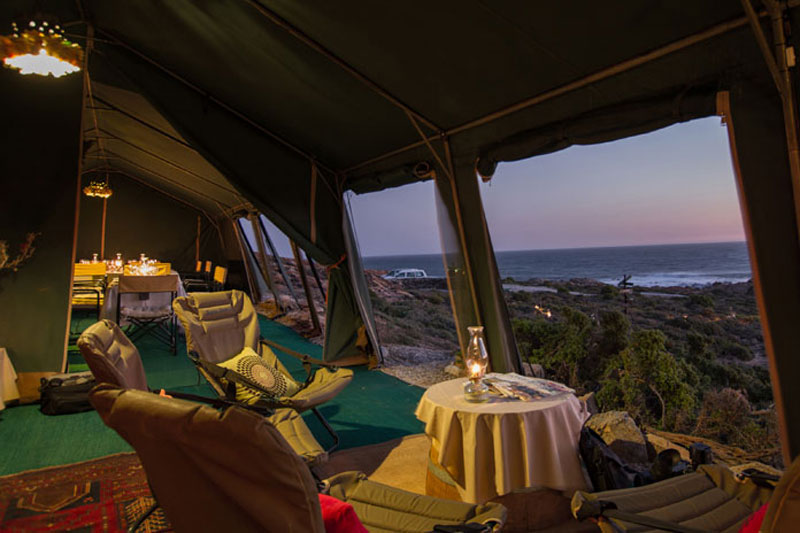 During the flower season, and even out of season just to experience the unusualness of the location, stay in this Northern Cape tented camps right on the rock-strewn beach.

There are 15 luxury canvas dome tents, each with their own hot shower, dressing room and chemical flush toilet (plumbing this close to the ocean isn’t sustainable).

Highlight: the tented camp lies just north of the Groen Rivier entrance to the Namaqua National Park, you can watch the sun rise and set over the Namaqua, and the skies at night have to be seen to be believed. 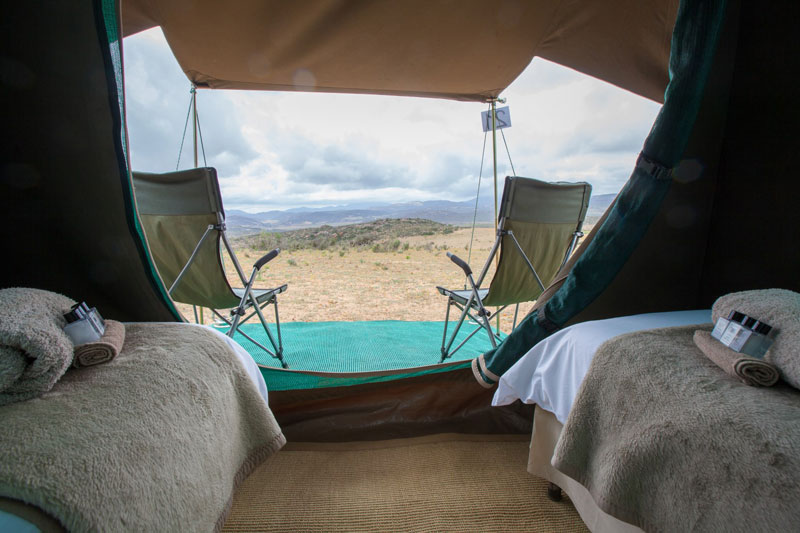 Stay here during the flower season (beginning of August to the middle of September) and camp amidst the carpet of flowers.

There are 20 luxury canvas dome tents, in similar fashion to the tented beach camp above.

Each tent comes with all the modern luxuries you’d expect from any hotel stay, with your own hot shower, dressing room and chemical flush toilet (you are out in the midst of nature, forget flushing loos). Meals are included, and there are lunch picnics on request.

Highlight: walks, cycles, picnics in amongst the flowers. 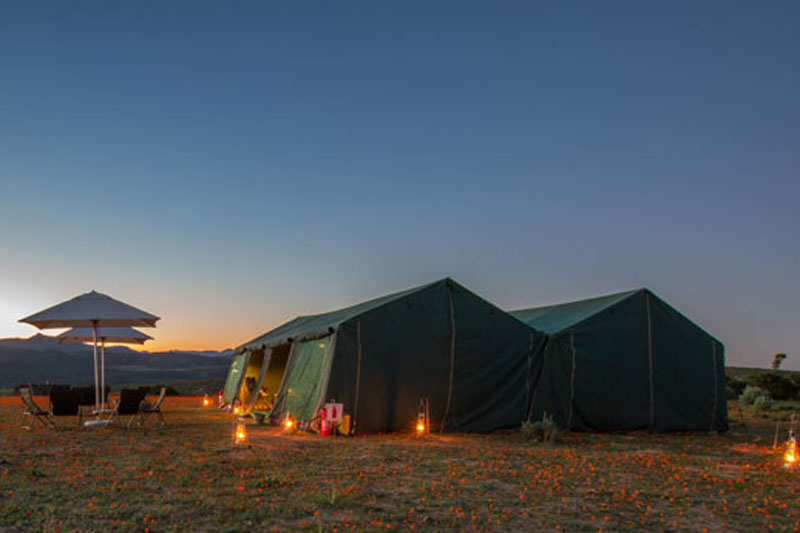 Have you been to any of these Northern Cape tented camp? We’d love to hear about your experiences …