The City Bowl of Cape Town is abuzz with flavours, sounds, people, cultures, languages and colours. The vibe is undeniable and the allure irresistible. At the heart of this pulsating city centre is nestled one of the oldest and best known markets in the country, Greenmarket Square.

Its official address is 54 Shortmarket Street, but the stalls, arts and crafts extend well beyond this square, giving visitors and locals more than enough variety and intrigue.

Greenmarket Square was originally established in 1696, after which the first burgher house was set up. Later, the Old Town House was built there and used as a meeting place for municipal issues to be discussed in private.

During this time, Greenmarket Square was used for the trade of slaves, fruit and vegetables. In 1840, Cape Town was made an independent municipality, and the Old Town House became the first City Hall. 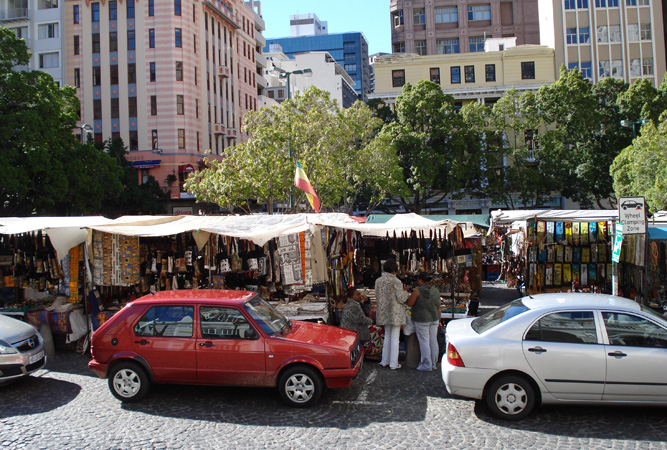 Because of the history associated with Greenmarket Square, it is not only loved for the shopping opportunities it presents, but also for the exquisite architecture and heritage that it boasts. The Methodist church dates back to 1871, while the Protea Assurance building and Market House display some of the city’s best art deco-styled architecture.

The stalls at Greenmarket Square are as varied as they are numerous. Visitors can shop for clothes, shoes, jewellery, hair accessories, music (beware of pirated goods), curios, memorabilia, gadgets, food, African-centric goods and so much more.

In addition, the actual square is surrounded by established restaurants, bars, hotels and coffee shops. There are plenty of places to rest up and refresh yourself before heading out into the shopping area again. The cobbled square and surrounding roads are designed for the daily visitors that flood to the market, creating a busy, but organised, hub in which to browse. Cars are not permitted to drive in or around the square, which makes it safe for pedestrians.

Being in the heart of Cape Town also means that Greenmarket Square is close to many of the city’s hotels and attractions and is accessible by public transport, by private vehicles or on foot. 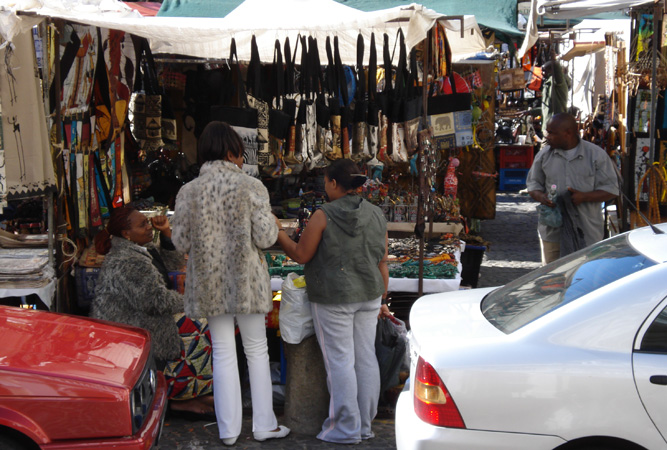 Because the Mother City is such a popular destination on a global scale, Greenmarket Square is constantly being upgraded and maintained with the international tourist in mind.

As with any destination in the world, visitors are urged to keep a watchful eye out as they peruse the market. Do not carry too much cash on you, and always be aware of your handbag or wallet. Try to leave expensive photographic equipment at the hotel, perhaps just bringing a simple camera along with you to capture the experience.

The ethnic diversity and vibrant ambience that permeates Greenmarket Square is very special. No trip to Cape Town is complete without spending a day within this bustling epicentre.